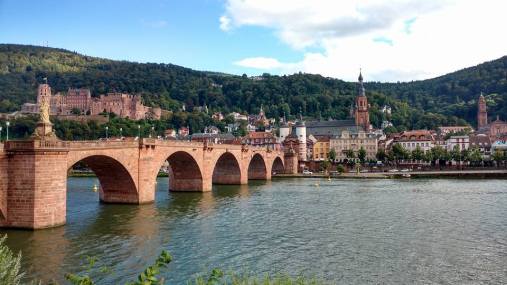 Heidelberg is one of the most bewitching places in Germany. It escaped bombing in the World War II because it was not an industrial hub and therefore of no particular strategic interest to the Allies. Therefore, unlike many German cities, it has buildings dating back to late Middle Ages and early Renaissance. One will easily get the old city charm feel in Heidelberg as it is one of the well maintained and guarded cities in Germany. The people also very friendly and cooperative, guiding all the tourists along the way. Since it is a famous tourist destination, one day at Heidelberg is  like visiting a fairy land and getting engrossed in the beauty of its old castles and fairy tale stories. I lost my heart in Heidelberg much like many others, ranging from everyday people such as myself to big names such as Goethe, Hugo and Twain to name a few. Given its romantic castle ruins, beautiful architecture in the old city, and serene walkways along the Neckar which flows nestled between two mountains, it is hard not to fall in love. In the peak summer season, the magnolias and cherry blossoms in seductive pink compete for our admiration. Picnics on the bank of the river becomes a common sight, as do ships and boats that halt along the river Neckar for evening cruises. I consider myself fortunate to be able to visit this fairy tale city. Many couples also make the way to Heidelberg to shoot pre wedding and post wedding snaps as the background is magnificent along the river.

Some of the best places to visit in this historically and culturally rich city are the castle ruins of the late Medieval and early Renaissance period. They look majestic even from the banks of the river built around 800 years ago, situated right in the center of the Altstadt or the old city.The view is striking and illuminated at night. None of the roof on the castle is  left and some of the walls are crumbling but it is still a striking sight. From such a high vantage point  the views of the quaint city below are truly stunning. Students get many discounts in this city and a walk uphill is worth it if you have lots of time in hand. Also for the hunger freak Indian, Raja Rani restaurant on Friedrichstraße is a treat to the tummy with delicious chicken delicacies and paneer assortments served with authentic Basmati Rice. This especially worth mentioning at this junction because after touring the whole castle you are bound to get hungry and search for places to calm down those butterflies. Fret not even if you are not interested in having Indian, Korean, Chinese, Thai, French and Italian cuisines make way for you situated on the Hauptstraße.

I felt awestruck standing and clicking pictures on the famous curved bridge built along the Neckar river which has the best view of the whole city. Apart from the the rich history of the castle buildings, the Elizabeth Gate, which was built overnight as a gesture of love, the Grosses Fass, the world’s largest wine barrel with a capacity of about 58,000 gallons is a must see. There is even a wooden dance floor on top of the barrel, led by a staircase. Another monument worth seeing is the Evangelische Church situated in the middle of the city. The cathedral has brown stone used and sourced from the mountains and looks fascinating from inside. There are intricate designs carved and painted on the walls inside the church which glow in daylight.

To talk about Heidelberg and not mention the university is a sacrilege. Indeed, Germany’s oldest university witnessed the rise of many great minds.The Ruprecht-Karls-Universität Heidelberg now comprises 12 faculties with a staggering 30,000 students from all over the world. I should add that, there is no tuition fees for students. However, all undergraduate programmes are conducted in German, whereas, there are a few graduate programmes, which are entirely taught in English.

I went on this trip with Mahesh and Praveen. Even after having seen the whole city in a matter of five hours, we were so bewildered by the sights we saw that we continued walking through the small town passing beautiful red stone buildings including an old library and some buildings belonging to the university. The red stone used in the construction of the buildings is local from the mountains as mentioned earlier. Also try having gelato as you make way through this quaint little town and its shopping streets. I had the caramel fondue flavour with waffles. Also bought tiny bottles of Jägermeister liquor to be shipped to India along with some friends as I found them to be at reasonable price!

Heidelberg is worth a visit on your trip to Germany!