I was recently at the Oktoberfest with my German besties Praveen, Shreya and Mahesh and hands down it is the most talked about German festival in the whole world and of course it is all about the beer. Set in the Bavarian region in a lively city called Munich is an internationally known festival everyone must know called Oktoberfest!!!

And yes it is just like everyone says and more…much more I would say! This year it started on the 17th of September and ends on the 3rd of October. Many people may ask “If it is called Oktoberfest why is it in September?”……well luckily l found out…this festival all started with a wedding festival on the 12th day in October of the year 1810. The wedding was that of Crown Prince Ludwig (later known as King Ludwig I) and Princess Therese of Saxony-Hildburghausen, who graciously invited the citizens of Munich to join in the wedding reception celebration at Theresienwiese (Meadow of Therese). It was a success, as it lasted for 16 days, and inspired the idea to repeat a similar festival at the same time the following year. The festival was eventually prolonged and moved ahead to September to allow for better weather conditions and that is why it is in September and not in October, although it traditionally ends on the first Sunday in October. This time it will end on 3rd October 2016 which is a Monday because we have an extended weekend as the German National Day falls on this day. 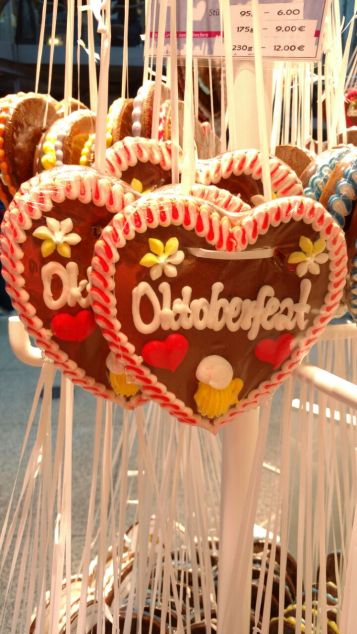 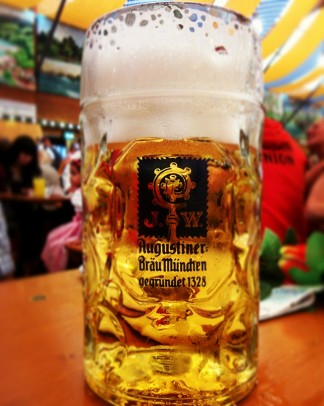 People in the fest are very welcoming and social asking us to join them, some said that getting a table is very hard later in the day because they expect to get over 6 million people there and not enough room is available at the end of the day since everything is packed to the brim. So we entered the tent at around 11.30am in the morning to avoid the rush and left early from Stuttgart. It is so true but if you are clever you can sneak into small spots on tables around the place. The owners were trying to fit in as many tables into those tents as possible so the tables were close and when it came to being at a table we had to stand on the seat area unless you want to be squished. But, most people were standing anyway – singing and drinking, swaying and jumping to the awesome music being played near by. Lots of German traditional music and many others you may know. My favourite being “99 red balloons”, played in German of course. Some locals even tried teaching it to me but as l was probably drunk l don’t remember it so well. In each tent was a big mixture of cultures from many countries like France, Italy, Spain, UK, America, Australia, Germany, Singapore, Vietnam, China and many more…however supposedly there was a tendency to be more of one country in each different tent. We got our first beers at the oldest known tent Augustiner where the brewery was built around 1328, cost was around 10 euros each….very expensive, however you got a 1ltr mug(Maß) each very tasty for beer(goes down well and easy) and it is very strong(as strong as 6 spirit drinks).

6.5 million litres of beer is consumed in only 16 days. That might sound like a crazy number, but considering that 6 million people visit the beer festival and that beers are served in 1 litre steins, this number doesn’t seem too outrageous any more. That’s just a little over one stein per person, and I definitely contributed to this number (maybe even above-average, ahem). I am not sure when the beer tents were added to the festivities, but nowadays, there are fourteen massive tents on the grounds, each of which belongs to one of the famous Munich breweries. There are the super famous ones like Augustiner, Hofbräu, Paulaner or Löwenbräu, and some of the bigger tents hold 10,000 people. Only beers from Munich-based breweries are served at the festival.

Another big part of the event is the food! Half a million roast chickens are consumed every year, plus hundreds of thousands of grilled sausages especially the Bavarian white sausages called Weißwurst, Steckerlfisch (fish grilled on a stick), piglings and other meat dishes….Oktoberfest is a meat lover’s heaven. Some of the tents also serve vegetarian and vegan options but they are very few. It may include some salads, Kartoffelnsalat, Kartoffelnknödel, Kartoffelnspätzle and Kartoffeln Gebraten mit Rosemary are some of the famous vegetarian options all containing the main ingredient as Potato. You also get the special Wiesn Pretzel which is a special kind of salty bread that is intertwined like an infinity symbol.

Some hilarious moments at the Oktoberfest could be somebody climbing on top of a table, under the applause of his mates, and downing a litre of beer in less than thirty seconds. When leaving the grounds, you’ll see drunk people sleeping on the side walks, and sometimes also in the middle of the street my guess is that those are the same guys that drink the beer in one go…hehe..one of my friend had the same fate of getting drunk and then acting like one psychotic idiot who goes around on the streets and wants to sit in the Oktoberfest itself. That’s not the only crazy thing you’ll see: the higher the level of alcohol, the crazier people get. I had a blast without any dubious powders, and this is definitely not my last Oktoberfest….and now that I have a dirndl, I will have to make sure that it gets used a lot. Until the next Oktoberfest where I will surely come back!!!!

Information on the history of the Oktoberfest gathered from the internet for a better understanding of why Oktoberfest is celebrated.