Oh la la!!…the first words we hear when the glimpse of Paris comes in, in the movie Yeh Jawaani Hai Deewani, a Bollywood flick starring Ranbir Kapoor and Deepika Padukone. The magnificence and grandeur is unmatched anywhere in the world. That oomph factor is raised automatically with hearts beating faster to run wild to the roads that lead straight away to Eiffel Tower built in 1889 by Gustav Eiffel for the Universal Exhibition in the 19th century. One more exciting place to explore, conquer and just feel. This time again with Studifahrten my favourites for weekend destinations because of the meticulous planning and so much help at any stage. Paris Disneyland. A world of its own. The land of fairies, pixies, princesses and where our all time favourite Mickey Mouse and Minnie Mouse were born. The place where pixie dust will make you fly into the magical world of good vs.evil. Those elegant once upon a time stories and the dreamy happily ever after endings. If you ever want to get totally lost, this is the place, roam around, be a child, run wild into the Toyland, let your wild spirits unleash in this sparkling world, be untamed and get crazy, show your childlike side at the Disney Parade or wonder in awe at the fabulous light show that makes your feet tap to the tunes of the 90s hits of Disneyland. Sway in the air with Alladin and Jasmine as well as fall in love as the prince of your dreams comes to make you feel enchanted in love!

The dawn mounted in the sky and the purple sky started turning orange and red as the sun rose over the Eiffel tower sky. I left from Stuttgart at night and reached Paris just as light broke in. It was peaceful and cold, yet mesmerizing. Coffee to go, freshened up in 10 minutes and off to see Eiffel Tower and a quick tour of Paris as the main agenda was Disneyland and not Paris this time. Disneyland is situated around 45 min drive from the main district of Paris and about 35min by metro from Gare de Lyon, the train station at Paris. A fantastic view of Eiffel Tower from the city centre and the photo shoot begins. Why not!..standing and viewing one of the most famous vistas and buildings in the world is a dream come true indeed. It took a quarter of my life to realise this dream. I felt like a child getting happy to see chocolates after that magnificent view. It was so grand and stood tall to glory. The most light weight tallest structure in the world, which is now a symbol of Paris. From the stairs to the fountain, from the pathways to the streets I took pictures from all angels I could and stood there for ten seconds wondering in awe and thinking about Kris, my life partner for a while, oh how I missed him. The sky gave me the perfect ambience to do so. The city of love and then the romantic weather, oh la la! So I am going to come here again in two weeks with my love so that we can feel it all together again. I saw the light break in from the Eiffel Tower and at one shot the night view changed to day view. So it was done, and a brief tour of Paris started so that we could just get an idea about the history of the city, for a next time in detail.

And so we set off to Disneyland Paris and I slept on my way for a while because waking up at 6:00am just to get that perfect Eiffel Tower vista, made me doze off. 45 min of the dreamy world was not enough I guess, the whole day of dreams and magic lay ahead of me. One more bucket list fulfilment. Disneyland Paris is actually made up of two parks Disneyland Park and Walt Disney Studios Park. Disneyland Park is what is traditionally associated with Disneyland and yes this is where you will find Mickey Mouse, Sleeping Beauty’s castle and flying Dumbo elephants. Walt Disney Studios Park also has many rides but has a focus on how films are made, how the characters evolved, some fun rides, and a sneak peek into the history of Walt Disney and how animation evolved over the years,there are many sessions and studio tours to illustrate this.

Disneyland Park is a perfect set in its own right. It comprises of Adventureland, Frontierland, Discoveryland, Fantasyland and Main Street USA. We spent the majority of our time in Fantasyland where we visited Sleeping Beauty’s castle,experienced the Disney Parade and light show which showcased all the characters of Disney, went shopping for princesses and yes met so many of them and also felt like one, went on Snow White’s adventure, the Pirates of the Caribbean ride, the ghostly bride experience, the Ratatouille Foody and 3D experience, went on tea cups , The Toy Story Character ride, flying on the Magic Carpet of Alladin and ventured through Alice’s Labyrinth. It was all a big hit and the lines were relatively short for these attractions. We also made it to the haunted mansion and the best part was that we got to be a part of the Halloween theme, decorated lavishly with autumn leaves of all colours. 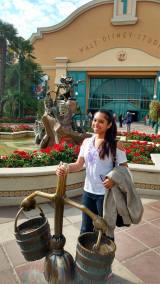 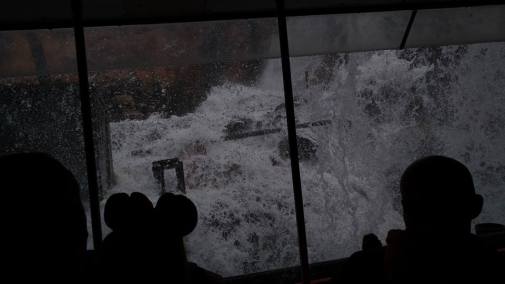 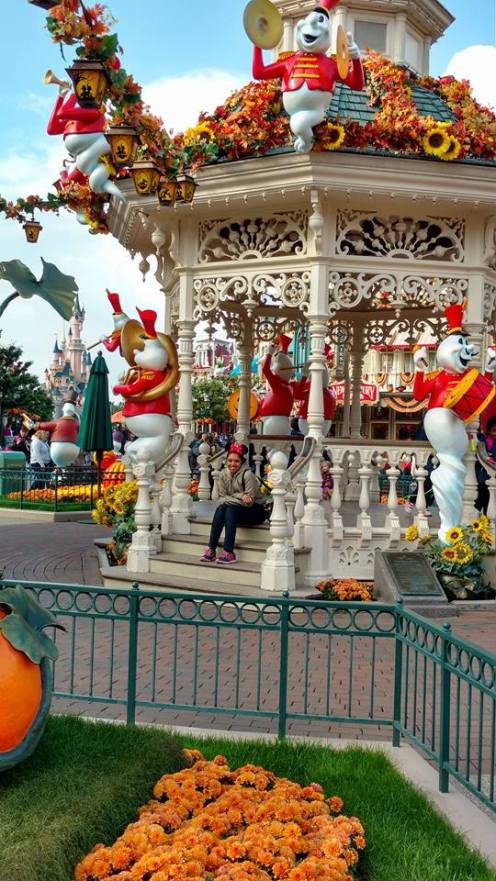 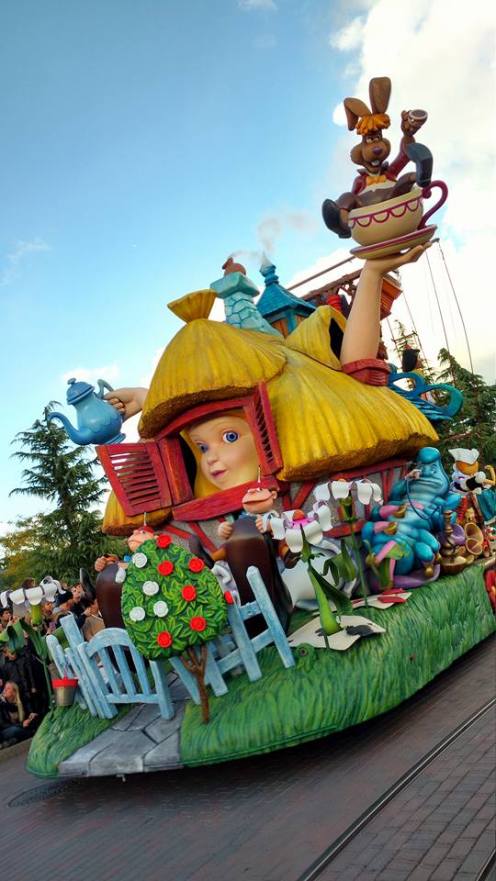 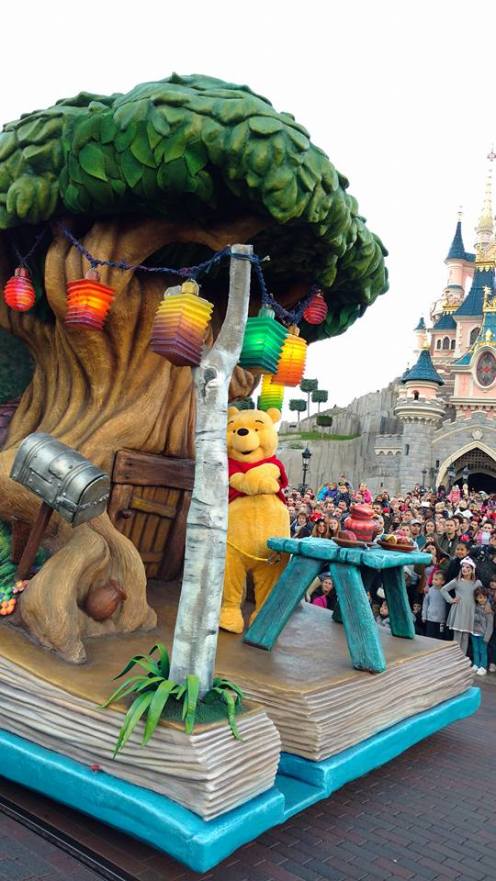 As mentioned before, you can discover how Disney movies are made! There are studio tram tours, how animations are made, a Toy Story playland, rides and so much more. I have been to many stunt shows at many different parks, but this is the first one I have seen like this. They explained many of the stunts and the tricks behind them. They also had cameras around the lot so they could show us the little tricks they did during the show on a big screen. Finally they showed us a complete reel of the scene, adding all the little bits and pieces together that they had shown us into what it would look like in a movie. It was incredibly interesting and it gave me a lot of respect for the stunt directors and just how people manage to create films in general piecing together so many little pieces.

Some tips along the way:

Fastpasses – if you are two people, one should try to race around and get fast passes for the attractions that offer them. Fastpasses give you a ticket to return to the attraction at a later time when you can effectively skip the queue. This can save so much time.

Take lots of water and juices along with you. Also remember to keep packed sandwiches and some munching snacks as the stuff inside is dirt expensive!

Go to the shows! These were our highlights. Turn up early though.

Overall a mind blowing experience and worth a visit again with my sister. I want to come once more. I relived my whole childhood in one single day. All the fairy tales were my best friends and yes dreams come true!.. Believe in yourself :). Praveen, my dimple besty accompanied me on this fairyland adventure!

Until the next trip.